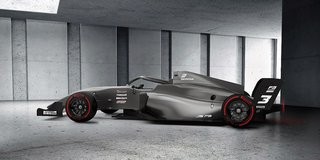 “At the F3 Americas Championship launch, we stated that we were searching for a six-stop, 17-race schedule on premier tracks, concentrating on the United States to start,” SCCA Pro Racing Vice President Steve Oseth said. “We’ve done that, and now can let those interested in the series know not just what they can race, but when and where.”

The following two stops on the schedule include the Mid-Ohio Challenge with the NASCAR Xfinity Series at Mid-Ohio Sports Car Course, Aug. 9-11, and New Jersey Motorsports Park for a formula-packed weekend with F4 U.S. and FRP, Sept. 13-14.

Road Atlanta, Sept. 21-23, will be shared with Historic Sportscar Racings’ fall vintage weekend. The F3 Americas field will travel to the Big Easy for the Xtreme Xperience at NOLA Motorsports Park Oct. 13-14 for its penultimate event. The inaugural championship will be decided during the prestigious F1 U.S. GP at COTA Oct. 19-21.

“With more than 100 years of Pirelli motorsport experience and development for the drivers of powerful sports cars, sports coupes and high-performance luxury sedans, we’re excited to be a part of this new F3 series, which directly ties into the learning and success we’ve had at the premier levels of motorsports,” said Orazio Mastracchio, NAFTA Motorsport Manager for Pirelli NA states.

The F3 Americas series continues the evolution of affordable, competitive and technologically advanced open wheel racing which was established by the successful F4 U.S. Championship that debuted in 2016. This next level of open wheel racing meets the demands of racers and teams looking to grow their capabilities into more sophisticated, powerful machinery. Since its reveal at Circuit of the Americas last October, the new series has generated significant interest in the racing community. Seventy-two chassis purchase agreements have already been sent to teams and drivers.

The F3 Americas car will be powered by a 270-horsepower Honda Performance Development (HPD) version of the new Honda Civic® Type-R® turbocharged K20C1 motor (a non-turbocharged version is used in the F4 U.S. Championship). This reliable and powerful engine is manufactured in the United States at Honda’s Anna Engine Plant, and the engines are shipped to HPD in Santa Clarita, California, for racing modifications (including installation of a dry sump and other race-specific components). HPD will continue to provide on-track support as with the current F4 U.S. series.

“The success of the F4 U.S. series is a testament to the potential for an affordable and accessible development series, and we’re pleased to continue to power the dreams of these drivers as they graduate to the next step of this series,” said Art St. Cyr, HPD President. “All Honda engines are known for their reliability and performance, and the Honda K20C1 engine is just another example of that—we’re able to use the flexibility of a single engine platform to power two series, reducing cost while meeting the performance needs for each level.”

“The excitement for the Ligier JS F3 and the F3 Americas Championship has been building since our announcement in October,” said F3 Americas developer and Onroak Automotive General Manager Max Crawford. “With our extensive experience with building composite race cars and strong, lightweight composite materials for racing and aerospace industries, we are producing a chassis with the safety features of the current F1 chassis.  The Ligier JS F3 exhibits the latest in technology, safety and styling which is the new standard for the FIA F3.”

Twenty cars are anticipated to be produced by opening weekend with delivery from Onroak Automotive starting in June, and another 20 cars will be supplied by the end of the year. For parties interested in purchasing an F3 Americas car, contact Steve Oseth at soseth@sccapro.com or David Cooper at d.cooper@onroak.com.

The F3 Americas Championship aligns with the global FIA development ladder philosophy of using common components to provide a cost-efficient, reliable, and powerful racing structure as drivers ascend through the levels on their way to U.S. or global racing success.

About Honda Performance Development:
Honda Performance Development, Inc., (HPD) is Honda's racing company in North America and is a wholly owned subsidiary of American Honda Motor Co., Inc. Founded in 1993, HPD is the technical operations center for Honda's high-performance racing programs. HPD specializes in the design and development of race engines, chassis and performance parts, and technical/race support. We also offer parts and race support to Honda and Acura grassroots motorsports racers, and are expanding our support of racing series and programs that make Honda racing products available to all racing styles, from karting and Quarter Midgets to the highest levels of pro racing.

About Pirelli Tire N.A.:
Founded in 1872, Pirelli & C. SpA is the fifth largest tire manufacturer in the world in terms of sales.  Present in over 160 countries, Pirelli has 22 manufacturing sites and employs approximately 38,000 people around the world. Pirelli is a leading producer of premium tires due to its commitment to R&D. Successfully competing in motorsport since 1907, Pirelli is currently the exclusive supplier of the Formula 1 championship, the Superbike world championship, and many single marquee championships around the world.