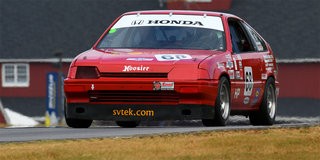 ALTON, Va. (October 12, 2019) – Vesa Silegren, from Chattanooga, Tennessee, took the win in H Production at the 2019 SCCA Championship Runoffs®, leading a Honda sweep of the podium behind the wheel of the No. 68 Hoosier/svtec.com/KONI/Carbotech Honda CRX.

Silegren jumped to the lead from second place on the start and led every lap of the race, fending consistent challenges from second-place finisher and fellow Tennessee driver Will Perry in the No. 36 Rivergate5speed.com Honda CRX.

“I was able to jump Steve right away,” said Silegren, who would have to duplicate his good start after an early-race full course yellow. “The double yellow came out and bunched up the field, but I was able to hold them off.”

Once in the lead, the first and second place Hondas might have looked similar but made their speed in different places.

“(Perry) always caught up to me going into Oak Tree,” said Silegren, “I was able to pull away a little bit on the back straightaway, which was great.”

Second-place finisher Perry took advantage of his softer-compound Hoosiers to be able to challenge for the lead.

“I got a great start,” said Perry, describing his charge from sixth to third in the first few corners. “I run an autocross tire and it’s ready to go right now.”

Perry was able to grab second before the end of the first lap when Steve Stergis’ car slid wide leading onto the front straight. From there, Perry would dog the eventual winner.

“It turned into a race of minute mistakes,” Perry said, “One little mistake could have completely changed it and he just made fewer mistakes.”

Enrik Benazic, from Farmingdale, New York also had a great start in his All Star Sheet Metal Honda Civic Si moving from seventh to third in the first three laps. Once in third, Benazic knew he had to run a smart race.

“I wanted to challenge Will right away,” said Benazic, who was tempted to make a move for second but was being challenged by two-time Runoffs® champion Ron Bartel running in fourth. “I thought, ‘no, stay stay stay,’ and he fell off finally.”

Benazic did manage to be a part of the three-car breakaway but wasn’t able to mount a challenge for either of the top two spots.

“The last couple of laps I fell off and started getting sloppy,” said Benazic. “It was a hell of a race. Eeesh”

Christopher Riley, from Longview Texas, finished fourth and Tom Broring, from Derwood, Maryland, finished fifth. The Sunoco Hard Charger was John Fine, who earned the award for driving the No. 69 HPD/Hoosier Honda Civic Si from 25th to 11th place.

Live, online video coverage of Runoffs races, presented by Mazda, is available throughout the three days of competition at SCCA.com/live. An audio race call, supplied by the Super Tour Radio presented by Hoosier Racing Tire broadcast team, is also available at www.SCCA.com/live, as well as live timing and scoring for each National Championship race.